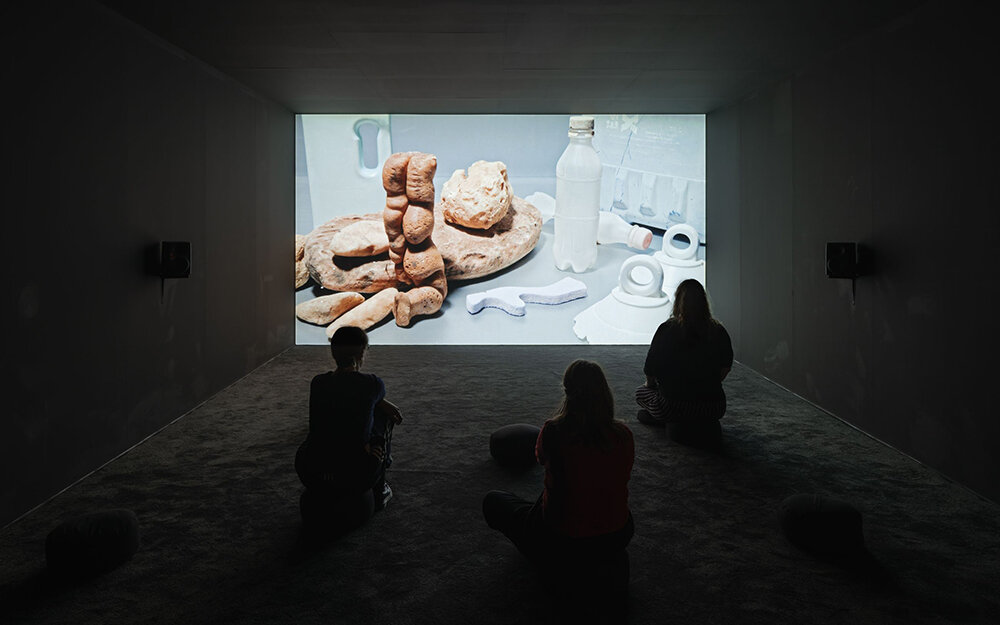 Amalie Smith’s (1985, DK) exhibition Clay Theory at Kunsthal Aarhus is a meditation on the link between life and clay. It takes the form of a 3D movie presented in Kunsthal Aarhus’ Gallery 1, transformed for the occasion into an entirely black room fitted with a soft carpet and meditation mats. In this setting, visitors view the work through active 3D glasses that are switched on and off 120 times per second, alternating between the right and left eye.

The focal point of the film is a group of terracotta figurines: small human figures from the Cypriot Bronze Age, shaped out of reddish-brown fired clay. They can be seen on display at the Cyprus Museum, an archaeological museum in Nicosia, Cyprus. In the film, the terracotta figurines become the centre of a speculative axis that dates all the way back to the origins of life on a barren planet and extends out into a posthuman future where man-made life is a reality. Along the axis between this speculative primordial time and an imagined future, we find clay-based myths of creation emerging in all parts of the world. We also find the story of the Cypriot king Pygmalion, who carved an ivory sculpture so lifelike that she actually came alive. We have golems, homunculi, Frankenstein’s monster, cyborgs and androids. It would seem as if humanity has long held a desire for – and fear of – creating life. Perhaps we will be able to do so in the near future. If so, will we look back on the terracotta figurines as precursors of artificial life?

Jeppe Lange: The Truth About Your Feet

It’s funny how everybody seems to sympathize with the string quartet that kept playing even though the ship was going down.

And afterwards, when their bodies were hanging weightlessly. Surrounded by water for thousands of miles.

This gradual revelation that what we call the ocean is actually just the surface.

Shots of a hand on a green leaf, a glass of wine, a cigarette being lit, French fries falling down in slow motion and other seemingly unrelated yet familiar images are repeated throughout Jeppe Lange’s film.

These are images we somehow know as they form part of our popular culture image bank, having become recognisable forms we quickly decipher as signs for something we should desire. Inserted into and interrupting this flow is footage of three women who describe their memories of an event creating a sense of uncertainty and suspense to the entire piece.

The memories of the three women overlap, but only manage to unfold into broken narratives. Despite this enigmatic atmosphere what remains seems to be cinematic images comprising an alphabet or a language, that is, the tools for producing meaning. Lange explores how this imagery works on individual and collective memory, activating both in order to accomplish a sense of coherence or completion. The piece generates a sense of searching, as if trying to recreate something in your head that happened long ago.

As a sideman: Blomqvist -- Paradisets Børn

Playing with the band I II III at Koncertkirken, Nørrebro.

Score for Hjerteskrig by Kirsten Astrup, made for the exibition Urolige Hjerte at Museet for Samtidskunst in Roskilde.